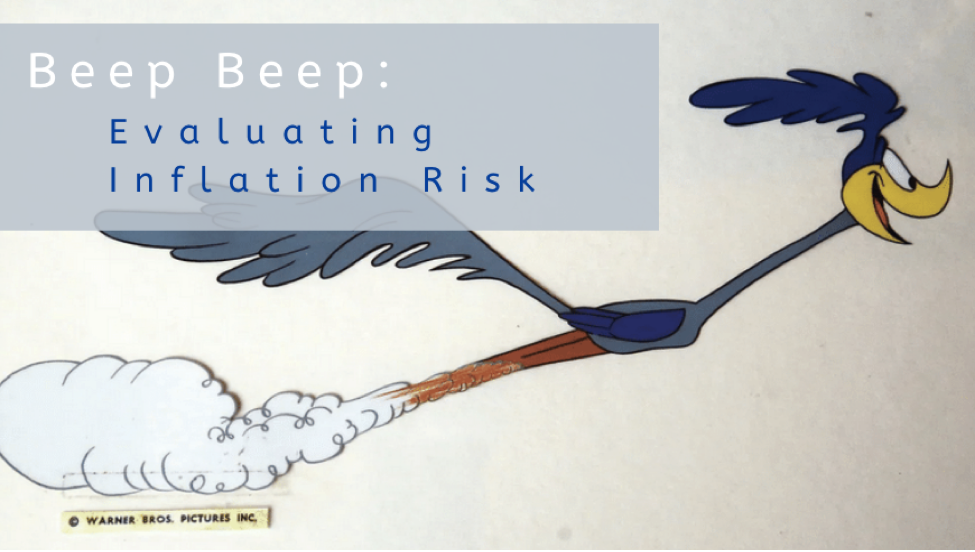 Most are familiar with the Road Runner and Wile E. Coyote characters from old Looney Tunes cartoons. The Coyote is always seeking to catch the Road Runner, but the Road Runner continually defies the physics of his traps and escapes. Usually, the Coyote ends up not only foiled in his attempts for a meal, but also meeting some sort of untimely demise – often getting smashed, falling dramatically into a canyon, or hitting a wall.

JP Morgan recently put out a very well done blog post titled, “Inflation Risks in the Wake of the Pandemic,”[1] in which they used the Coyote and Road Runner’s tumultuous relationship as a metaphor. I’d like to build on that.

Back in 2008, theory said we should have had inflation, but that year’s Road Runner economy defied the rules. It sped away with a “beep beep,” unharmed by the inflation trap. We’re facing a similar economic plight now in 2020, but we do not know if we are going to experience another Road Runner economy — or a Wile E. Coyote one, in which we rev up just to run into a wall. The trick is to be in assets that will do well whether inflation remains low or high.

We believe technology will perform well in either environment. Many in the investment world do not recommend gold, because it does not pay a dividend or interest (which makes it difficult to value). With bonds paying zero, there is much less opportunity cost when holding gold. Neither really pay any income, so there is little to miss out on. But if inflation does move up, gold should do well. It is already gaining due to inflation fears, though it’s not yet realized.

Not all price increases are due to monetary policy. As an example, the meat supply continues to struggle. Cutouts (or the meat you buy at the butcher) are at an all-time high. However, the price of cattle continues to follow a downward trend. The bottleneck is in the processing of meat. This is an example of demand pull (or when demand outpaces the supply) and is not necessarily due to money supply.

This does, however, still mess with the measurement of inflation. Despite being in a severe downturn, prices of everyday items have been stable and climbing.

In summary, “Inflation risk is high” has been a recurring theme in our GWS market updates. To clarify, we are not saying, “High inflation is certain.” We are saying the risk of inflation is high given the unprecedented expansion of the money supply. In 2008, we expanded the money supply and most expected high inflation, but it never showed up. The outcome this time remains to be seen.

Before we get further into economic implications, let’s look at the COVID-19 death rate data, where it seems there is finally a light at the end of the tunnel. Though deaths are still being reported daily, we are past the mid-April peak, and states are beginning to reopen. 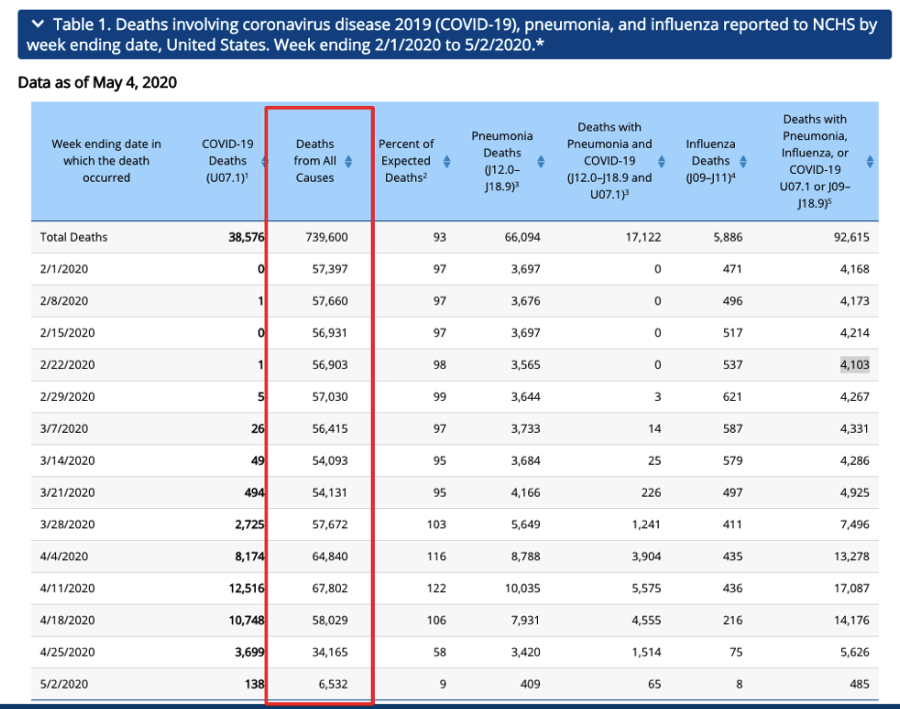 There continues to be a saw-tooth formation in COVID-19 death rate data, but that pattern is likely due to the Center for Disease Control (CDC)’s changed methodology in April. In essence, the CDC wanted to err on the side of caution in reporting deaths due to COVID-19 vs. other causes of death.

During a White House briefing, Dr. Birx stated, "The intent is ... if someone dies with COVID-19 we are counting that [as a death due to COVID-19]." This is probably prudent, but how do we look past possibly skewed data. How do we review the deaths in a slower-paced data gathering environment? Let’s look at the death rate table below.

When COVID-19 is reported as a cause of death – or when it is listed as a “probable” or “presumed” cause — the death is coded. This can include cases with or without laboratory confirmation.

So, why these numbers are different? The counts often track 1–2 weeks behind other data for a number of reasons, one being that death certificates take time to be completed. Currently, 63% of all U.S. deaths are reported within 10 days of the date of death, but there is significant variation among jurisdictions. It takes extra time to code COVID-19 deaths.

The CDC indicates 38,576 deaths. This number will increase. But we can still see the peak in the data as mid-April (remember more than 63% of the data is in for weeks more that are more than 10 days old.

Looking at the second column, we can see the total number of deaths climb above the mid 50,000s into the high 60,000s per week. We know more people are dying due to the outbreak.

Also instructive is the number of weekly deaths — between 3,000 and 4,000 per week — from pneumonia. That number jumps during the COVID outbreak, but not high enough that the health care system is unable to absorb the increase demand. Thankfully, this fear has not been realized. We will continue to monitor both data sets. Though more accurate, the CDC data is not as timely.

Checking in on Sweden

You may remember from past market updates that we mentioned Sweden did not “lock down” their economy, making them an interesting “control” in viewing lockdowns’ effects on death rates. 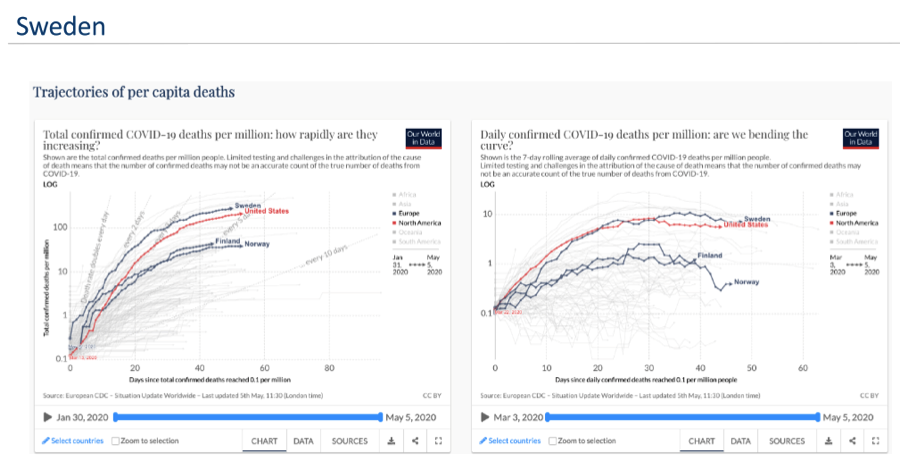 How are they doing relative to other similar countries? Most notably, they are on the higher end of deaths compared to the US and their neighbors Finland and Norway. The similar results are encouraging, since it suggests much of the slowing is due to natural means and not the lockdown. If this interpretation is true, we are less likely to experience a significant second wave.

As of May 6, Q1 Earnings Season had a Beat Rate: 63% – Beats: 708   Misses: 409[2]. This sounds impressive considering the current environment, but remember, this the 1st Quarter. Most companies were open for the majority of the time frame.

So far, 79 companies have stopped buybacks and 31 cut dividends. We believe this demonstrates good stewardship on management versus looking at the short-term effect on the way stocks are priced.

How Bad Is the Damage?

Though we believe the market will continue to move up, the economic data is showing severe damage to the economy. Once again, it is important to separate the market from the economy. The point of the stimulus is to keep prices up despite the economy. 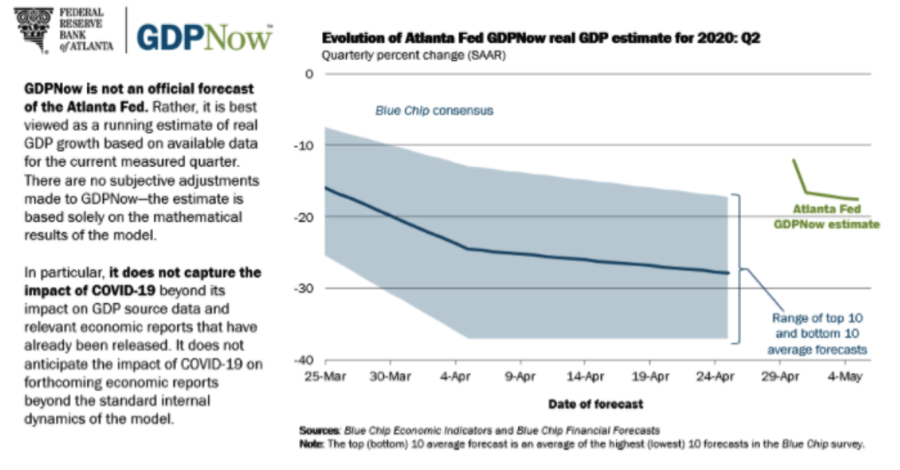 On a darker note, GDP data is coming in, and it looks rough. Currently, the Blue-Chip consensus range is flattening, although it is still on a downward trend. GDPNow is projecting a -9.33 (annualized) decrease in GDP. This is lower than last week’s read of -7.79 So far, the drop is slowing, but we have not seen evidence of a bottom.

The Weekly Economic Index is an index of real economic activity using time-sensitive and high frequency data, published by the Federal Reserve. It is not going to be easy to just open up the economy, and we fear the bottlenecks will be found throughout the economy, not just meat distribution as noted above. Though not due to monetary inflation, the change in consumer prices may change people’s psychological view on inflation and begin to spend money before prices increase again.

Once again, it is important to separate the market from the economy. In addition, we are in positions that are doing well, despite the economic problems.

But look at the growth rate in the money supply (pink line). We are going through the fastest growth in money supply since the data has been collected. The Federal Reserve is supporting the market and The U.S. Treasury Plans to Borrow Record $3 Trillion in Second Quarter.[3] As a comparison, the annual budget spent by the US government last year (not quarter) was 4.4 Trillion. Stay invested and in positions that can do well in both a slow economy and an inflationary economy.

For our clients nearing or in retirement, we wanted to provide more clarity on our cash hub and cash bucket strategies. In late 2018, we raised cash hubs from 12 months to 24 months, meaning we held onto two years of cash needed from investments.

We have had two sharp selloffs since then and would not recommend going back to 12 months until we’ve seen good economic data and lower equity valuations first. We continue to recommend spending down the cash hub and will look to fill “cash buckets” as the market makes new highs.

In summary, the country is breathing a collective sigh of relief as death rates diminish. But we’re not out of the woods yet. We need to keep an eye on GDP and inflation to see how they ultimately respond to the pandemic’s economic hit. After all, the jury is still out if we’re dealing with a Road Runner or Coyote economy.

Companies mentioned are for informational purposes only. It should not be considered a solicitation for the purchase or sale of the securities. Any investment should be consistent with your objectives, time frame, and risk tolerance.