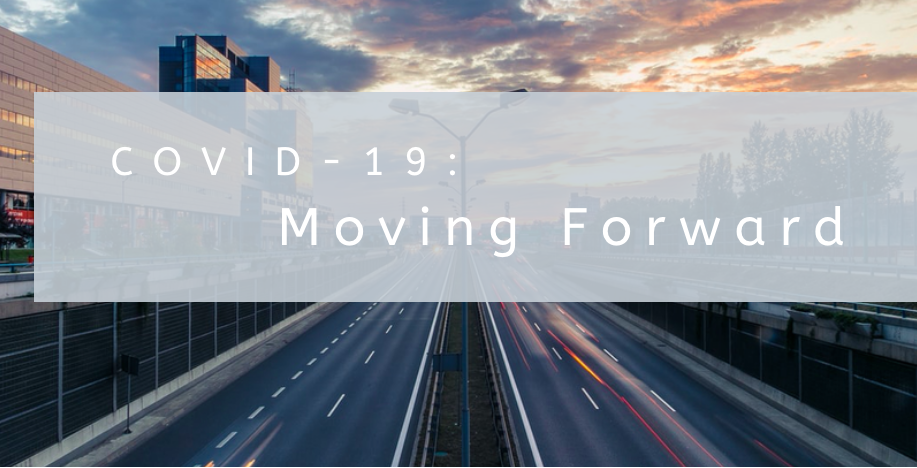 Across the country, Americans are collectively hoping for one thing: the official announcement that we’ve “flattened the curve.”

Fortunately, we’re still tracking to flatten the curve in the next couple of weeks, and our testing is getting better and better. Despite its lag at the beginning, the U.S. has done more testing than any other country, now that regulation on private labs has been removed. 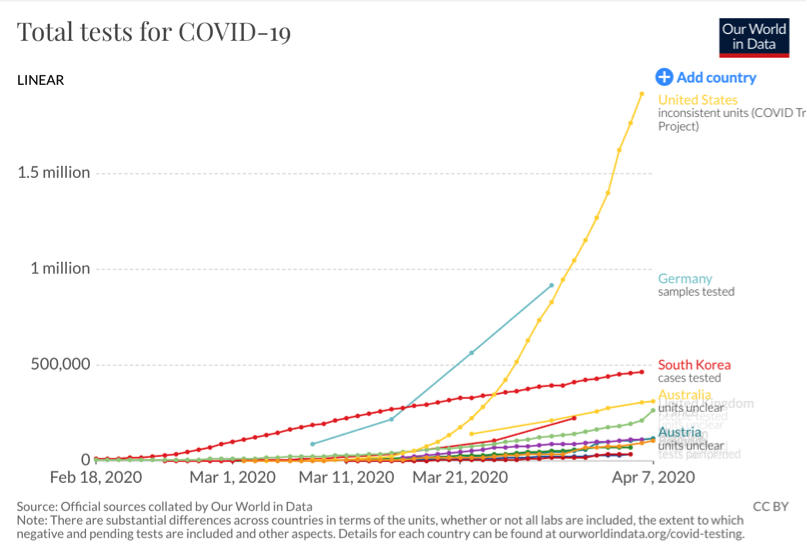 There is still room for improvement, however, since the U.S. is behind on a per capita basis. Though good news, this has made it difficult to track changes in new case metrics, simply because we are testing more people every day. 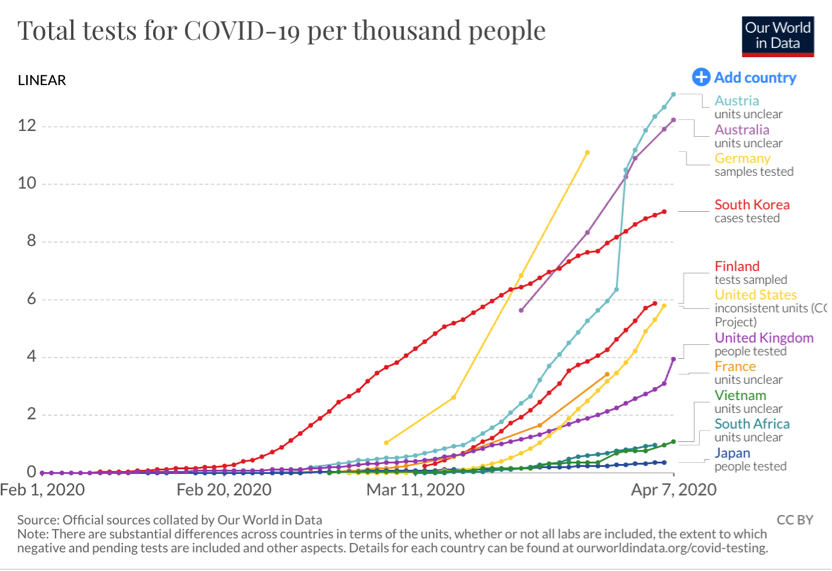 That said, there are ways of removing this noise from the data, and Friday provided evidence we had turned the corner in the U.S. This was confirmed over the weekend, and we believe it’s the reason for the sharp rally on Monday.

Thankfully, the death rate is not only slowing, but it is not as high as once feared.

Our initial model assumed 100,000 deaths. As of Tuesday, April 7, we expected total U.S. deaths of 24,000 based on our internal models. However, the spike in deaths by the end of the day caused us to adjust this upward to 30,000. This is near our Bull Case scenario.

While reviewing other models yesterday, some (such as the IMHE [1]) are still estimating 80,000 – 100,000 deaths. The numbers have been consistently near the lower bound of the uncertainty range. When I reviewed the site on Wednesday, the estimated deaths had dropped to 60,000.

This means the economy is likely open sooner rather than later. We are unlikely to make the earliest date mentioned for opening the economy. You may recall the Trump Administration hinted at Easter, but we are, also, unlikely to go to June.

The market rallied based off this information. As you can see, we are continuing the V-shape recovery pattern.

Let’s get into what is ahead, and specifically concerns we are hearing:

Is This the Next Great Depression?

Our investment committee does not believe this is likely. However, we think the differences between now and the Great Depression are instructive with what we see going forward, so we want to spend some time on this.

The Great Depression was caused by four factors:

Before we take a deeper dive into this topic, let’s review the formula for calculating Gross Domestic Product (GDP).

To review the model, GDP is the total value of the income in the economy. This is an aggregate of:

I am not trying to bore our listeners with economic equations. It is my personal belief the science places too much faith in them; but it would be helpful to review the standard Keynesian GDP model when assessing the differences between now and the Great Depression.

So, let’s add some images.

If we look at Global GDP, then we could remove the Net Exports section.[2] Currently, the Earth does not trade with other planets, so there are no Net Exports to consider. This will help simplify the equation.

Now, let’s look at the four factors attributed for causing the Great Depression:

Notice the equation calls G “Government Spending.” Where does the government get money to spend? Yes, some of it is taxation. But if it were that, the Ts would cancel each other out.

Instead, in the version below, you’ll see the larger T has a minus sign. So, we can see that if the government increased tax, but did not increase spending the tax by the same amount, GDP would contract. 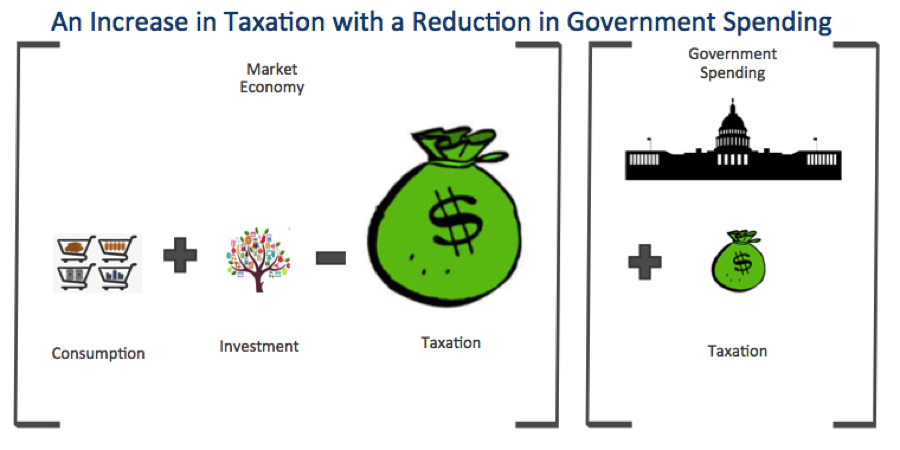 The point of the illustration is to demonstrate that an increase in T and a decrease in spending will contract GDP. However, this is not happening at the moment. Governments are spending well above taxation levels.

We dove into these concepts further on our market update call, and we plan to post the video to our YouTube channel in the coming weeks if you’d like to explore them further.

Studying economic implications can be disheartening, and it may seem like a bunch of accounting tricks to undermine what’s actually happening in the economy. That’s why it’s so important the government puts regulations in place, so they can prevent the market from adjusting to the realities and ignore data-skewing accounting.

We have seen some calls for increased regulation, but we have seen more regulation removed than brought to law. For example:

So why not always run deficits and have the Federal Reserve send checks to everyone, every month? This gets us to another concern we have heard:

Another equation may be helpful. We are leaving the Keynesian school of thought and moving to the Monetarist. They, too, have an equation for GDP, but this one better captures the Central Bank’s role:

In the Monetarist school of thought: 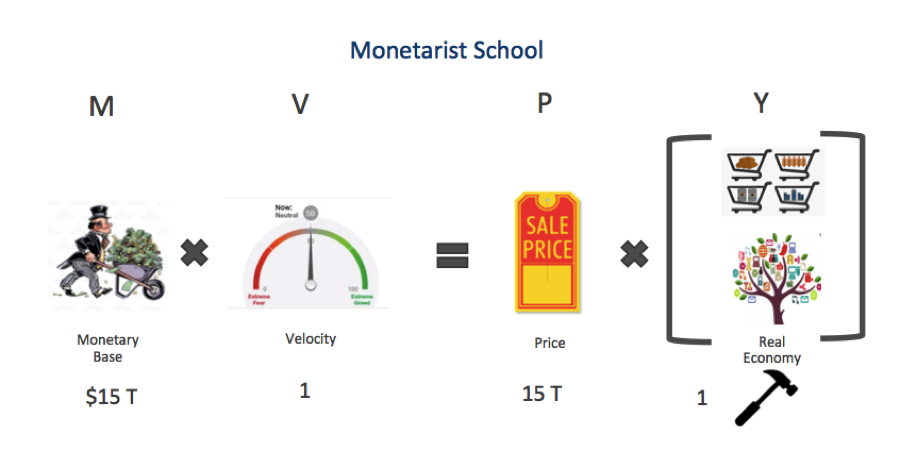 Let’s keep the 15 Trillion-dollar monetary base. Then, only half the cash is needed so V is 0.5.

So, if money supply is stable and the real economy increases due to greater production, then there are more goods relative to the amount of money. Assuming velocity stays the same, we would expect deflation.

If the money supply is rapidly increased, and velocity stays the same and the economy did not grow as much, we would expect to see inflation.

V is related to human psychology, so it is not easily changed by the powers-that-be. It is based on our collective actions.

Hence, the money supply is the direct lever for the Federal Reserve. The goal of the Central Bank is to match the increase in M to Y so we get stable prices. (Actually, they try to have some inflation.)

We mentioned the size of the total stimulus package as 25% of GDP. And we know Y, the real economy, has not increased by 25%. It has dropped since the economy has been furloughed. This does not necessarily mean an increase in P or prices of goods. People may not spend the money, and V drops to offset the increase in money supply. This happened in 2008.

Or, the new money could spur additional investment, and production capacity increase rapidly. This also happened in 2008 with efficiencies gained by technology. (One example is increase in the supply of oil due to fracking. Remember peak oil?) Nonetheless, 25% more productive seems like a high hurdle. We believe inflation is a real risk. [3]

I hope heads are not hurting at this point. The banking system is odd. And mathematical formulas are for the geeks-at-heart, so I am going to move past this and talk about what we are doing about these risks.

What Can We Do about It?

The Great Depression did not just fall out of the sky. The 1920s saw a very loose monetary policy as the British pound was losing its reserve currency status. Plus, the increased production of the mass industrial era was hiding the monetary inflation from showing up in P (price of goods). I mentioned the gold restrictions earlier to allude to this.

Ultimately, the depression needed to happen. This was to cleanse from the roaring 20s monetary inflation. However, it did not need to be so severe.

We believe a similar phenomenon his happening now, and it is important to plan for a Great Depression-like event. That said, we believe the depression is still a decade away. We expect a robust response from the market as we continue to automate and onshore production in the U.S and add to production through technology. The greater risk is inflation.

We’ll take a deeper look at inflation risk in next week’s update. If you have any questions about these concepts or your personal portfolio, please reach out to your lead advisor.

[1] This site has been referenced by the Trump administration

[2] It is too detailed for this discussion, but any trade export or import must balance in the capital accounts; therefore, a prolong national trade deficit in a fiat economy will cause an increase in the capital surplus accounts due to the foreign goods being purchased in US dollars. The national government will absorb these dollars by increasing the treasury offerings and increase the national debt. If a country were on a gold standard, gold would flow out of the country.

[3] As another talk, we could explain how the deflationary reaction by the federal government was caused by inflationary action in the 1920’s (Gold) and the reliance of measuring.