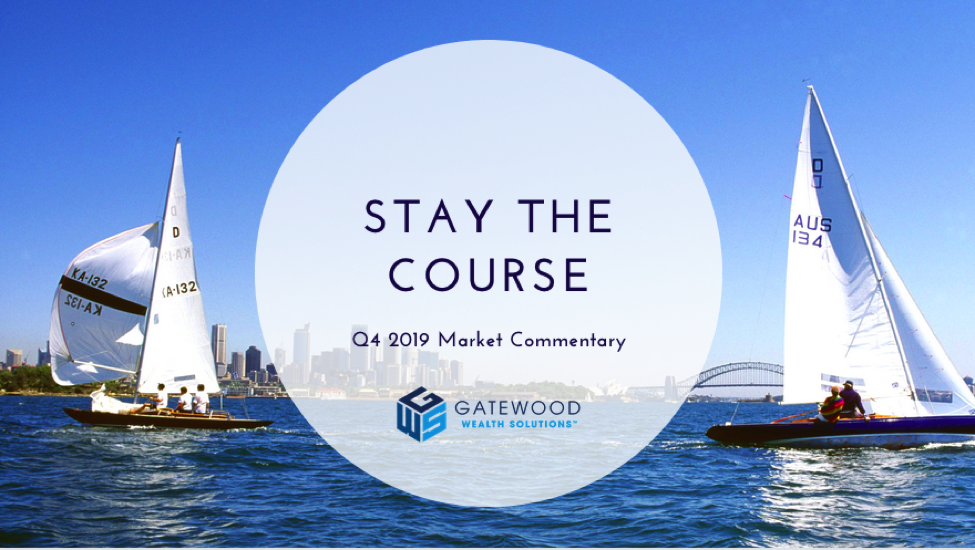 When threatening storm clouds loom in the distance, any sailor with a sense of self-preservation will change course. Our innate fight-or-flight instinct is hard to shake.

The sailor has to quickly evaluate the imminent storm’s severity and do a cost/benefit analysis. Do the skies portend a light rain—or a destructive monsoon? Is it worth veering off course, adding time and cost to his trip?

Investors face a similar challenge in today’s market conditions. Skies seem sunny now, but projections of doom and gloom for 2020 run rampant. It’s difficult for an investor to ascertain whether it’s safer to stay the course or bail completely.

We’ll explore this quandary in more detail, but let’s start by summarizing the past three months of market activity as context for our discussion. Overall, 2019 can be summarized into two main categories that influenced performance:

Despite the “Santa Claus Rally” rise in the market through December, the recession narrative continues to evolve. Investors actively seek evidence of what they fear most: an economic downturn.

A Look at the Skies Ahead

Although there have been a number of predictions for a 2020 recession, we see no signs of one in the near –term: at least, not in the first half of the year. That statement comes with the caveat that a market downturn could happen at any time for any reason. We just have no indication to believe that it will in the next six months.

You might wonder, How high can the market possibly rise? It is a valid question, especially since we are in the midst of the longest economic expansion in history—and expansions generally end with tight monetary policy and credit problems. Because credit is so easy to come by during a strong market, we as consumers are essentially “borrowing” from the future economy. We have to put everything back in eventually that we take from it now. With memories of 2008 still relatively fresh in their mind, many investors are waiting with bated breath for the next shoe to drop.

It is quite possible there could be years before such a pullback, although there is merit to the fear of a retraction. Monetary easing eventually leads to a bubble, and there is a direct correlation between the length of the easing and size of the bubble. Inevitably, the bubble will pop.

However, as long as the Fed continues to push lower rates, the market will likely keep climbing. The higher it climbs, the more we see the emergence of the “wealth effect”—essentially, when people feel better and are willing to spend more. Wages are increasing across the board, also contributing to this effect. In 2019, the lower 25% of wage earners enjoyed an average increase of 4.2% in 2019 (well above inflation). (1)

And with Central Bankers around the world pursuing a similar accommodative monetary policy, it’s likely the global market will also continue to rise. A rising tide lifts all boats, as they say.

What Could Trigger a Bear Market?

Although we don’t anticipate these events happening in the first half of the year, it’s still possible that any of the below could shift the proverbial tides toward a pullback.

Inflation Is Not Dead

The topic of inflation warrants further discussion, as it would be easy to assume that inflation protection in portfolios is no longer necessary. But while U.S. inflation may be dormant now, it is not dead.

With wages increasing across the board and employers fighting to retain talent, prices will eventually reflect these increases. This is particularly true, given the fact that the largest wage increase was seen in the lowest percentile of wage earners. This group is more likely to put their pay increase back into the economy via the purchase of consumer goods (vs. capital markets), which has a more visible effect on pricing.

Home prices also rose in 2019 as a result of lower interest rates and higher wages. Buyers are willing to pay more at these lower rates and stretch their incomes to bid up prices. Sellers and buyers alike feel the wealth effect as their home equities increase with the rising prices.

Finally, the wealth effect of higher wages and higher asset prices mentioned above leads consumers to spend more. Since consumer spending drives two-thirds of the economy, this behavior quickly drives up the market.

What This Means for Investors

U.S. states and local municipalities are beginning 2020 in better fiscal shape than they have been in years. Given the tax benefits for U.S. investors, we believe demand for municipal bonds should remain strong. In the continued low-interest-rate environment, it is prudent to remain invested in short-duration fixed income. Equities remain the place to be to earn yield, while maintaining the potential to outpace inflation.

Thanks to global accommodative monetary policy and with de-escalating protectionism pressures, growth is likely to stabilize toward the second half of 2020.

In addition to the potential for rising inflation rates, it’s important to keep an eye on the rising Middle East conflict. After President Trump’s comments to Iran last week, it’s likely the country could consider his words an act of war and retaliate accordingly. One route they may take is to mine the Strait of Hormuz, a narrow body of water that runs between the Saudi peninsula and Iran. Because that area is so geopolitically sensitive, it’s likely that the U.S. would respond with an air campaign targeting Iranian refineries—and possibly bringing in Israel, as well, for a strike.

Although unlikely, if this occurred simultaneously to interest rates rising again, it would create the perfect storm to destroy supply. Essentially, supply and demand would decrease at the same time; and rising interest rates would prevent us from leveraging fracking as a means for resources.

While election years can be volatile, we believe the underlying fundamentals of the U.S. economy will provide ballast to stabilize the markets, especially in the first half of the year.

That said, there are a number of other factors that could contribute to a pullback in the second half of the year, including raised rates, high inflation or a major credit event. Our advice is to stay the course, enjoy the continuation of 2019’s expansion and make sure your cash needs are met. Just keep an eye on the increasingly tense geopolitical climate—and any telltale darkening skies.

The U.S. Large Cap asset class is measured by the S&P 500 Index, which is a capitalization-weighted index of 500 stocks. The S&P 500 Index is designed to measure performance of the broad domestic economy through changes in the aggregate market value of 500 stocks representing all major industries.

The U.S. Mid Cap asset class is measured by the S&P Mid Cap 400 Index, which is the most widely used index for mid-sized companies and covers approximately 7% of the U.S. equities market.

The Real Estate asset class is measured by the Dow Jones US Select REIT Index. The index is a subset of the Dow Jones U.S. Select Real Estate Securities Index (RESI), which represents equity real estate investment trusts (REITs) and real estate operating companies (REOCs) traded in the U.S. The indices are designed to serve as proxies for direct real estate investment, in part by excluding companies whose performance may be driven by factors other than the value of real estate.

A Real Estate Investment Trust (REIT) is a tax designation for a corporation investing in real estate that reduces or eliminates corporate income taxes. In return, REITs are required to distribute 90% of their income, which may be taxable, into the hands of the investors. The REIT structure was designed to provide a similar structure for investment in real estate as mutual funds provide for investment in stocks.

The Commodities asset class is measured by the Bloomberg Commodity Index (BCOM), formerly the Dow Jones-UBS Commodity Index, which is a highly liquid, diversified and transparent benchmark for the global commodities market. It is calculated on an excess return basis and reflects commodity futures price movements.

The Global Equity Index as referenced in this report is the combination of the equity indexes listed above in proportion to Northwestern Mutual’s strategic asset allocation model for the equity aggressive model and as reported by Morningstar Direct as of 06.30.2018.

The opinions expressed are those of Aaron Tuttle as of the date stated on this material and are subject to change. There is no guarantee that any forecasts made will come to pass. This material does not constitute investment advice and is not intended as an endorsement of any specific investment or security.

Please remember that all investments carry some level of risk, including the potential loss of principal invested. Indexes and/or benchmarks are unmanaged and cannot be invested in directly. Returns represent past performance, are not a guarantee of future performance and are not indicative of any specific investment. Diversification and strategic asset allocation do not assure profit or protect against loss. With fixed income securities and bonds, when interest rates rise, bond prices usually fall because an investor may earn a higher yield with another bond. Moreover, the longer the maturity of a bond the greater the risk. When interest rates are at low levels, there is a risk that a significant rise in interest rates can occur in a short period of time and cause losses to the market value of any bonds that you own. At maturity, the issuer of the bond is obligated to return the principal (original investment) to the investor. High-yield bonds present greater credit risk than bonds of higher quality. Bond investors should carefully consider risks such as interest rate risk, credit risk, liquidity risk, securities lending risk, repurchase and reverse repurchase transaction risk.

Investors should be aware of the risks of investments in foreign securities, particularly investments in securities of companies in developing nations. These include the risks of currency fluctuation of political and economic instability and of less well-developed government supervision and regulation of business and industry practices, as well as differences in accounting standards.