Our founder and CEO, John Gatewood, recently share with me an interesting quote: “Fear does not stop death. It stops life.”

The quote is a reminder that this is a fearful time — and we don’t take that lightly — but we also don’t want it to stop us from living. Our data still indicates that COVID-19 deaths peaked in mid-April, and businesses are slowly opening up across the country. The reopenings are bringing back economic activity, and although the recession is deep, we are likely beginning the slow ascent from the bottom.

Will There Be a Second Wave of COVID-19?

Fears of a second wave are certainly on everyone’s minds. We continue to watch other countries’ data to try to get an indication. Currently, there’s little difference in the data between the US (lockdown), France (very strict lockdown), and Sweden (no lockdown).

We don’t have a sufficient sample size to say if there is a statistical difference, and there is likely a lot to learn about how virus works. But, it’s clear that the virus does eventually abate on its own at some point when herd immunity has been reached, whether or not a lockdown is involved.

The other weapon against a second wave, of course, is a vaccine. Moderna1 reported success in their vaccines on May 18th, saying all their participants were able to produce the antibodies they were looking for. The market rallied at the news. However, further scrutiny revealed the vaccine didn’t look as promising as they made it out to be, and the market went back down as a result.

We saw another drop this week in the Blue-Chip GDP Consensus. Blue-Chip is a general consensus of what economists see moving forward. However, the New York Nowcast did register a positive number with the high frequency data. Does this signal the bottom?

The jury is still out, but we are seeing higher foot traffic, hotel occupancy, and gas sales. Keep in mind, this is off a very deep bottom. But it would be reasonable to see economic activity increasing as the economy opens.

We continue to maintain the recovery is V-shaped, but the market has had a slight pause around the 2950 mark on the S&P 500. As a reminder, in a V-shape, we bottom out but go back up and eventually hit new highs. That’s in comparison to a U or L-shape, where we bound off the bottom but very slowly (The Great Depression is an example of an L-shape).

Is the current pause foreboding? Yes, but it doesn’t mean we will re-touch the lows. It’s normal for markets to have a base, as they’re testing the current valuation. We know this is giving clients pause. We’ve all experienced 2008, 2011, etc., so it’s normal to be concerned with steep selloff. But we do think we could still see a pullback, but it would be temporary.

With the economic slowdown greater than what we expected a couple of months ago, why are we still optimistic on the market? For the same reason we mentioned before: monetary policy is literally off the charts. 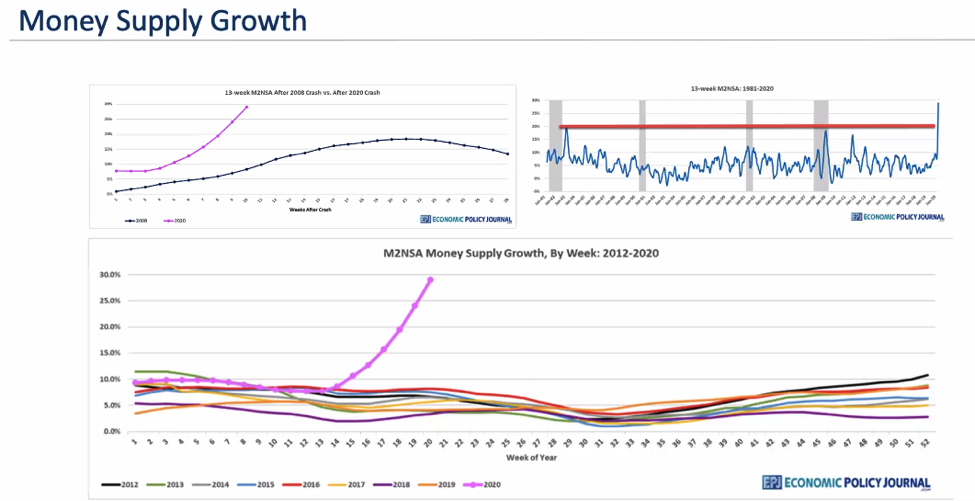 Thirteen weeks M2NSA annualized is near 30% percent (pink line). The lower chart’s X-axis has been changed twice dealing with the growth rate.

This money has to go somewhere, and it starts in the capital markets. The top left-hand chart compares the current money supply growth to the growth in 2008. After the great recession, the Fed Opened up the spigots and created more money than ever before —until now. The top right shows growth rates going back to Paul Volcker in the early 80’s. We have never been this high before over this time. But is it enough?

If it is not, and we see the market start to sell off, there are two guys say they will continue to pour money into the economy: Chairman Powell and Treasury Secretary Mnuchin. And they matter.

Chairman Powell2 stated, “We’re not out of ammunition by a long shot,” referencing the ability of the Federal Reserve to intervene. He was reiterating there is “no limit” to what the Fed can do to lend money to financial markets. “We’re committed to doing everything we can as long as we need to,” Powell said.

During a Senate videoconference, Treasury Secretary Mnuchin stated, “The recovery may take some time to gather momentum, and the passage of time can turn liquidity problems into solvency problems. Additional fiscal support could be costly, but worth it if it helps avoid long-term economic damage and leaves us with a stronger recovery.”

Any sharp decline in the market will be met with additional stimulus, despite the significant amount of stimulus already injected. As they say, “bad news is good news for the market.”

We continue to hold an overweight to technology, as well as stocks that are now being called “COVID Stocks.” These are names that have benefited from the current crisis.

With the steep selloff in some stocks, many names are no longer eligible to be defined by the S&P 500 as large-cap. For example, most airlines no longer qualify. Many new tech names, such as Spotify and Zoom, were in the middle-market but now qualify as large-cap stocks.

This is causing concern about the weighting of tech names in the S&P 500 index. Currently, the top 10 stocks make up more than 25% of the total index. Google, due to its two share classes, is counted twice! However, Google, Facebook, and Amazon are technically not considered technology. They show up elsewhere, meaning there is even a larger tech weighting than indicated.

The point: what many thinks is a broadly diversified index has a lot of concentration in a few stocks and sectors. This is not a right or wrong (much of the returns of the index has come from these 10 positions), but the concentration may come as a surprise to many. The index committee will need to decide if they want to move some of the positions away from the technology sector and added other sectors.

Another filter on the S&P 500 is based on quality of earnings. Standard and Poor’s is historically a rating agency, so a quality tilt is not surprising. Tesla3 is a significantly large capitalized company but has yet to meet the earnings requirement and is NOT listed in the S&P 500. We believe these active tilts or filters are a key reason the index has done so well. It is not passive, but low cost. That’s why it’s such a hard index to beat.

As the economy reopens, Americans are ready to “start living” again. It will be interesting to see what the country’s “new normal” looks like as the economy picks back up — and businesses adjust to a more digital, diverse workforce than ever.

The opinions voiced in this material are for general information only and are not intended to provide specific advice or recommendations for any individual. All performance referenced is historical and is no guarantee of future results. All indices are unmanaged and may not be invested into directly.

The economic forecasts set forth in this material may not develop as predicted and there can be no guarantee that strategies promoted will be successful.

All investing involves risk including the possible loss of principal. No strategy assures success or protects against loss.

Dollar cost averaging involves continuous investment in securities regardless of fluctuation in price levels of such securities. An investor should consider their ability to continue purchasing through fluctuating price levels. Such a plan does not assure a profit and does not protect against loss in declining markets.

Companies mentioned are for informational purposes only. It should not be considered a solicitation for the the purchase or sale of the securities. Any investment should be consistent with your objectives, time frame and risk tolerance.