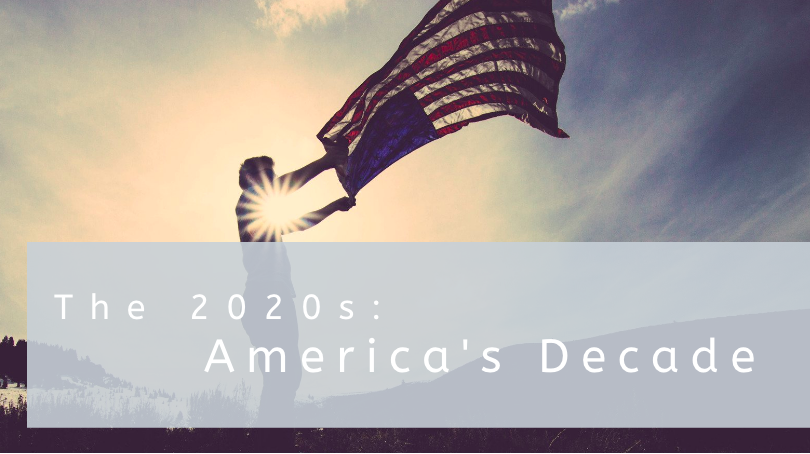 We can all agree we’re living in an unprecedented time. But this “new normal” is not the result of a virus alone; rather, it’s the outcome of a unique confluence of events. Alone, a virus, government actions, price of oil, or value of the dollar could never have had this level of impact on the market. Together, they’re a force to be reckoned with.

Much has happened in a short amount of time. On February 20th, the first community transfer of coronavirus was reported in California. This coincided with the first leg down in market. The market did start to recover in late February, despite first death. But on Sunday, March 8th, oil futures opened down substantially, due to an OPEC meeting during which Russia declined to slow production. The Fed intervened with $1.5 trillion in short-term loans, eventually brought interest rates to zero, and also dusted off old tools from 2008 (more on those later).

Then, President Trump declared a national emergency and began to restrict economic activity. It is our view that coronavirus is not unprecedented, and the market would have been able to price the crisis. We don’t say this to downplay the severity of the virus by any means, only to point out that the substantial drop in market is probably due to the unprecedented government response, combined with the Federal Reserve’s policy and price of oil.

A Light at the End of the Tunnel

On the bright side, it now appears that the market is starting to look past the virus. Our current timeline projects that the US will peak on death rates early- to mid-April, allowing the government to relax the lockdown near the end of April. (Note that we say “begin” to relax it, but it will be a start.) Our country’s GDP will likely bottom in early second quarter, and, if the first quarter comes in negative, we’ll hit the definition — two consecutive negative quarters — for a technical recession. Fortunately, we anticipate that activity will rebound by the Fourth Quarter and continue to rise in 2021.

All of this assumes that new cases are in the process of peaking. The exponential growth rate for most countries has been 33% compounded daily, and the US was following this trajectory from March 2nd-18th. As more tests were brought onto market, new cases in the US started to jump substantially, with daily growth rates at 140% in the beginning. However, we can see that they have since leveled off. If we had continued the growth rate of 33% since March 2nd, we would have had 350,000 new cases reported total this morning. This is not to say the number of new cases can’t get higher, but we’re starting to see the curve toward the top of the peak.

Likely, the death rate will peak in the next two weeks. There’s usually a nine-day lag between symptoms and death for those that the coronavirus does kill, which accounts for that time frame. Look for daily death numbers to be below the previous days’ numbers, and that will be a sign we are on the downward slope. (Obviously, there will be some noise in the data, but you just want to see the number consistently below the previous day’s to suggest we are finally “flattening the curve.”) The graph below shows projected US deaths per day from April to June.

There is a silver lining in this slow demand, because it gives us time to resupply prior to coming back online. Companies just need an idea of how long these restrictions will be in place. Yesterday’s announcement from President Trump gave some fear that this will be longer than expected.

Demand from consumers is not the only consideration. Businesses are going to be flush with cash and looking to put this to work. Companies will likely reassess their supply chain gaps and consider onshoring and automation. More on that later.

The Fed to the Rescue?

Let’s get into the fiscal stimulus. The government restrictions on activity are not the only unprecedented action. The speed and coordination of monetary and fiscal policy have been unprecedented, as well. 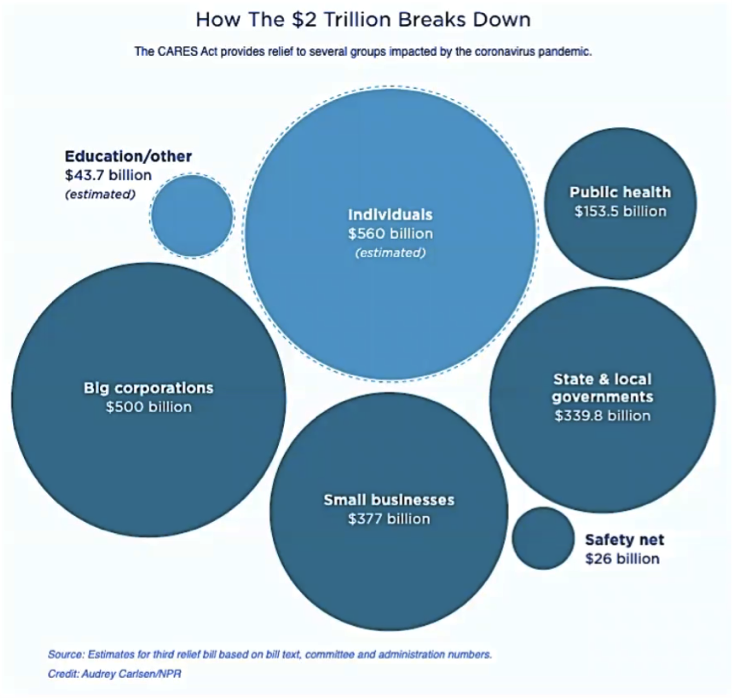 The size of the total stimulus package is 25% of the US GDP, and there is already talk of adding an infrastructure package. We’re still studying the CARES Act, but there is something for nearly everyone in the bill:

There is one group notably left off this list: the oil industry. This is a one-two punch for the industry, considering the price of oil and the fact that it’s now left out of this stimulus bill. As a reminder, our investment committee believes the price of oil will be the next focus, once the market is able to price back in consumer activity. Stay tuned for more content from our team on the CARES Act.

Monetary policy has also been unprecedented. The table below gives an overview of how much has happened in just a couple of weeks. 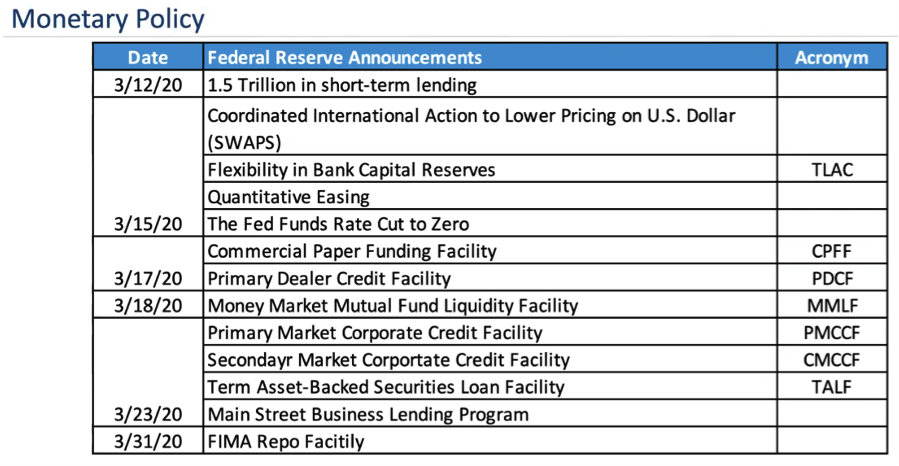 We look at this table in awe. At one point, borrowing from the Federal Reserve and not the open market or other banks was viewed with horror. It invited auditors into your bank, and no one did it.

Never before has the Federal Reserve said banks don’t need to hold any reserves. What would there even be to audit if auditors did show up? In theory, this means the banking system could create an infinite amount of loans — an infinite fractional reserve bank lending system with no fractional reserve left over. It seems the government is starting to create new tools, now that it’s already used all of its old ones.

On the Road to Recovery

The next question on our mind is, “Has the business cycle reset?” Essentially, COVID-19 just moved up the timeline on what likely would have been a slowdown in 2021 or 2022. The business cycle, we believe, will reset fairly quickly, depending on the number of business that close their doors. For the most part, it will be the weakest businesses that would have likely been removed during the next recession anyway (e.g., The Cheesecake Factory). This is certainly not true in all cases, though.

Based on this information, we believe the ‘20’s will be America’s Decade.

For starters, supply chain gaps will be reassessed as a substantial business risk. Companies are not going to sit around and wait for the next crisis to prevent their inventory from reaching consumers. We believe onshoring, unlike the offshoring in the 90s and 2000s, will be accelerated due to reassessment of supply chains.

Automation has already been accelerated due to better labor use in the US workforce and the ability to keep producing, even if employees have to work from home. Finally, the US dollar is likely to soften. This will make production in the US cheaper in comparison to other countries.

These considerations have led us to make a number of changes in portfolios:

Cash flow modeling is very important during this time. Once you know you have sufficient cash to weather the storm if the lockdown lasts six months, look to prefund the investment accounts you’re actively contributing to, such as your 401(k).

And, as always, we recommend buying on weakness. The graphic below shows all the returns since 1950 buying two weeks before, two weeks after, and at the bottom. It is of course impossible to know exactly where the bottom is, but the graph shows that it’s better to be early that late, so we will continue to add equity through weakness. 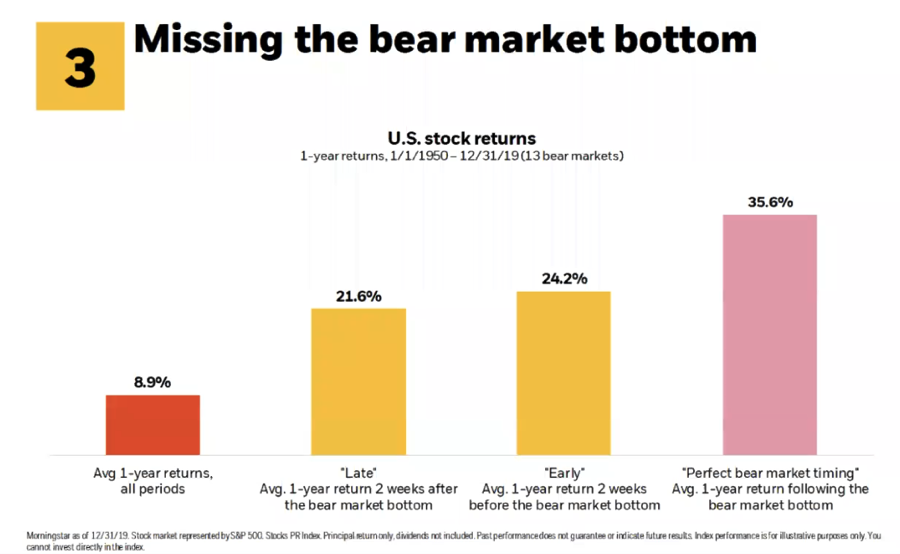 All in all, death rates are peaking, markets are looking up, and businesses are feeling bolstered from the stimulus. We’re starting to see the light at the end of the tunnel — one that hopefully signifies American’s entrance into a new “Roaring 20s” of the 21st century.