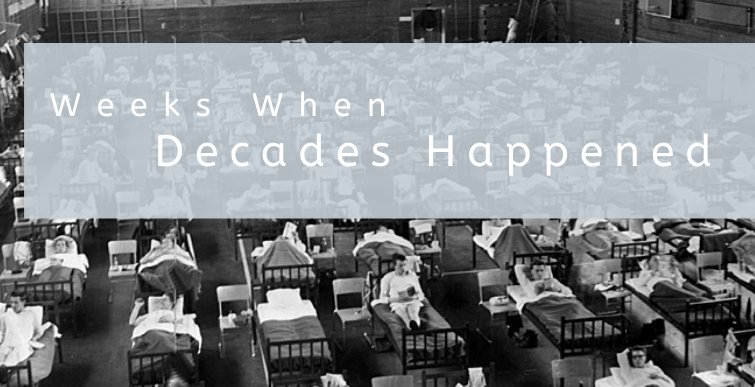 The blog below is a summary of our second weekly client call during this uncertain time.

We saw strong economic data in both January and February, and it shouldn’t come as a surprise that March data looked much weaker. However, we’re not in recession territory yet. To meet the technical definition, there would have to be two consecutive negative quarters. We may not be there yet, but we have certainly experienced the drop in market valuations as if it will be a recession. 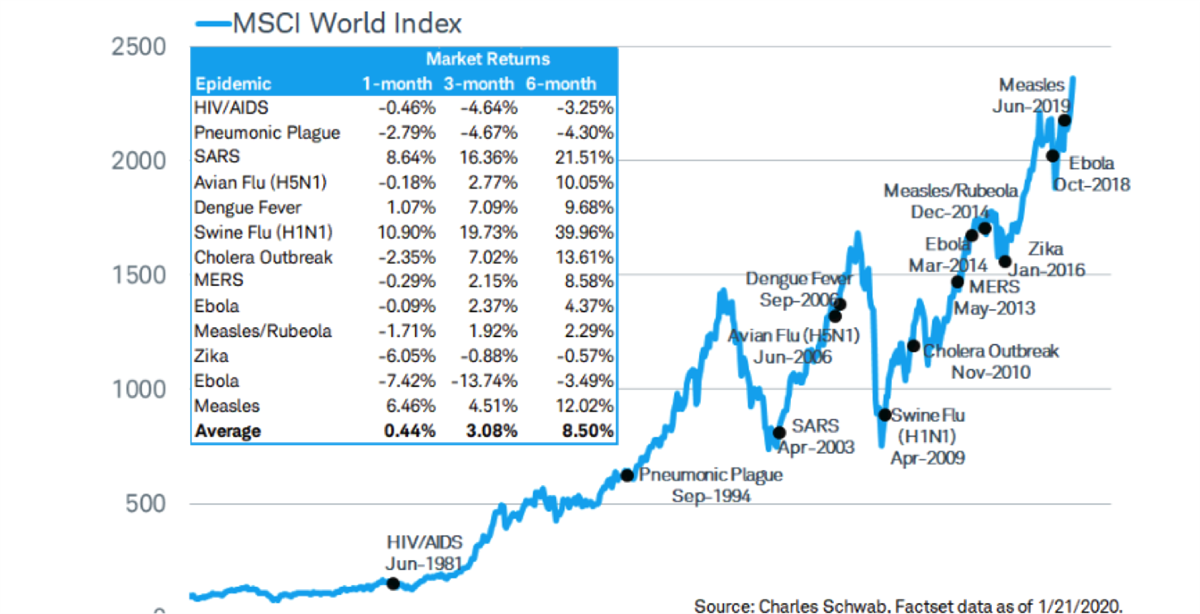 Learning on the Fly

Like you, we at GWS do not pretend to be physicians, but we’re working to bring you all the up-to-date, credible information about the virus and its impact that we can.

In late January, when the Coronavirus was just making headlines, we were asked if we believed it would have a significant impact on the markets. Our initial response was “unlikely.” After all, virus concerns have not been uncommon. And, whether a fluke or not, they often coincide with election years (e.g., Measles, Ebola, Zika, MERS, Swine Flu, Bird Flu, SARS – see graph below.)

What History Tells Us 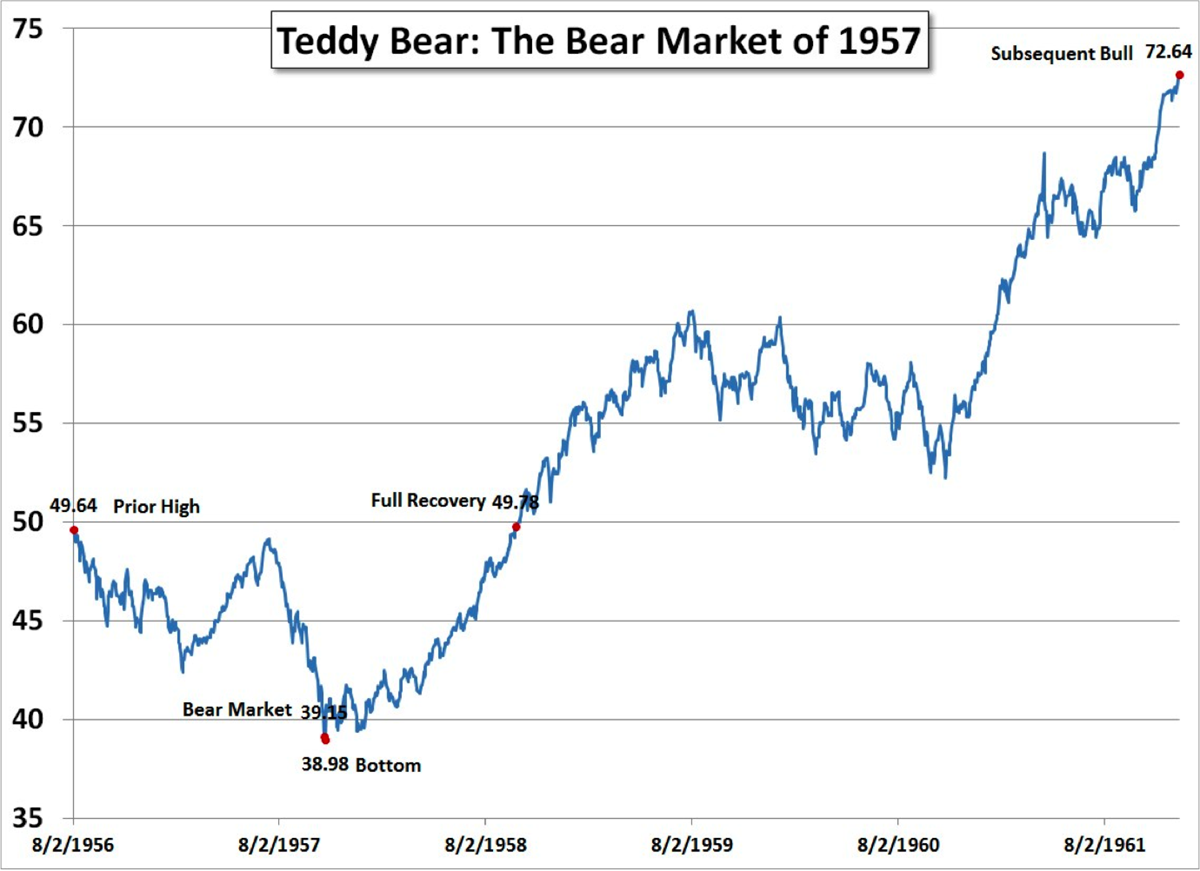 In this case and in the current state of things, it is helpful to remember that there is no one cause of a bear market. In the case of the “Teddy Bear,” there was a lot more going on than the Asian Flu. Also in 1957:

Just as was the case in 1957, we believe today’s economic issues stem from much more than just the Coronavirus. In many ways, it’s due to the government’s reaction to the virus.

Modeling and the Government

Is the government action correct? Once again, we are neither doctors nor epidemiologists (though we have modeled the impact of the virus in several scenarios). It all depends on the goal.

At GWS, our goal is to manage the risk in our portfolios; our objectives are focused on clients and performance. So, we use a probability-weighted assessment. In the government’s case, they are focused on using “an abundance of caution,” focusing on “worst-case scenarios” to try to flatten the curve as quickly as possible and err on the side of caution in all decisions. These are two very different goals with two very different approaches.

When we are managing portfolios for the virus at GWS, we are using Farr’s Law for modeling the disease. The epidemiological law states that epidemics tend to rise and fall in a roughly symmetrical pattern that can be approximated by a normal bell-shaped curve. It is a simple model but has proved more accurate when estimating number of deaths.

Farr’s Law captures social distancing and other strategies to reduce exposure and has done well with predicting the previous countries’ outcomes. Compared to more sophisticated models using differential equations and many more assumptions, the Farr model tends to reduce forecast fewer deaths. In fact, if the US were not increasing the amount of testing, we would like to begin to see the new cases drop over the next couple of days. Though frustrating from a metrics standpoint, it’s great news that we have more and better tests. This is ultimately a great improvement from just a week ago, and we are on able to test and get results in hours!

Other trends we have noticed using this modeling include:

The good news is the new cases should peak within the next week in the US, followed by another week for the lag in Deaths to peak. If Farr’s model is correct, we should be on the downward slope by Easter. In addition, we have not seen a resurgence of new cases in China or South Korea. Iran is on the downward slope and Italy likely peaked on the 21st.

As the disease curve and markets begin to flatten, financial pundits will likely shift to debates on the shape of the recovery: V, U, or L. We have differing views on this in the investment committee, which is good because it causes caution. My personal view is it will be a V shaped recovery, and I am inclined to add risk to portfolios. Others want additional confirmation.

So What About the Stimulus Bill?

This week will be all about the Stimulus bill making its way through Congress. As is typical for these types of votes, there were scary headlines provided by investment banks and economist over the weekend to help give Senators the proper motivation — including Federal Reserve Bank of St. Louis President James Bullard warning of 30% unemployment and 50% decline in GDP. (As a comparison, the Great Depression was 24.6%.) Bullard also said there would be a rapid rise in the second half of the year.

Call me a cynic, but my guess is these same people will call for restarting the economy once they pass the stimulus bill. Senator Mitch McConnell scheduled the vote on Monday 15 minutes after the market opened (so don’t play poker against him). On Sunday, the futures were down significantly, and it looked as if his strategy would work. But then Federal Reserve announced unlimited Quantitative Easing (Q-Efinity) to include purchases of ETFs for the first time, and the market rallied.

Now, to the stimulus bill. Trump administration economist Larry Kudlow has said the package would include $4 trillion in lending power for the Federal Reserve, as well as a $2 trillion aid package currently being hammered out by Congress.”[5] Together, this is ¼ of the US GDP. In Kudlow’s words, “This package will be the single largest Main Street assistance program in the history of the United States.”

Will they pass the stimulus bill? It’s likely. However, if the market continues to appreciate, it may not be needed. We would consider this a positive. Sure, the stimulus would likely prove the V-shape forecast correct, but it would also increase the deficit, and, therefore the country’s debt burden. GWS would consider it a win to not add to the US debt if it is not needed, since US debt is one of the greatest risks we face. That being said, if the market begins to selloff; the bill will pass.

Time to Sell Yet?

This has been a historic selloff. However, we believe it would be a mistake to sell. We still don’t know the bottom; I wish we did. But the returns coming out of bear markets can be very profitable. So far, we have seen one day rally north of 10%. Think of what a rally would look like when COVID 19 is over? We believe it is prudent to buy into weakness, because the upside potential can be rewarding.

Would we have liked to be more bearish prior to market selloff? Maybe. But this is not a business cycle slowdown, so it did not show up in the data.

Once again, we will not know the bottom until looking back many months from now. But the market is future-oriented, so it will begin to rise well before this is over. The issue is how much uncertainty there is around the virus and the shutdown.

Already, we are able to diagnose more quickly and treat with more effective medicine. We’re also becoming more familiarity with the true death rate and timing of removing the lockdown. Many in government are already talking about ending the shutdown, and President Trump is hoping to do so by Easter.[6]

This is not to say it is the correct response, but if our thesis is correct, then the market should rally. It is not a surprise to begin to have up days again, and we hope for more!

We have been saying for some time that bonds are tricky; in fact, we believe they are the most overvalued asset in the world. And, now they carry tremendous interest rate risk (whether this shows up in bond prices or not).

You are not getting paid a coupon, and how much price appreciation can you get? We have moved 50% of the bonds to high quality, short duration paper. If interest rates continue to go down and hit zero or go negative, we are going to continue to lag our benchmark. If interest rates move up, the benchmark will sell off substantially, but these shorter duration bonds should hold their current value.

The purpose of bonds in a portfolio is to lower volatility. Yet, during this historic selloff, many bonds have trade with equity-like volatility. We have decided to remove the volatility and lag the benchmark instead; it’s are just too risky.

Some of this may sound like a broken record. It’s one of the reasons we titled this “Weeks When Decades Happen.” Although this feels like an eternity, it will end, and the beginning of a new bull market will emerge.