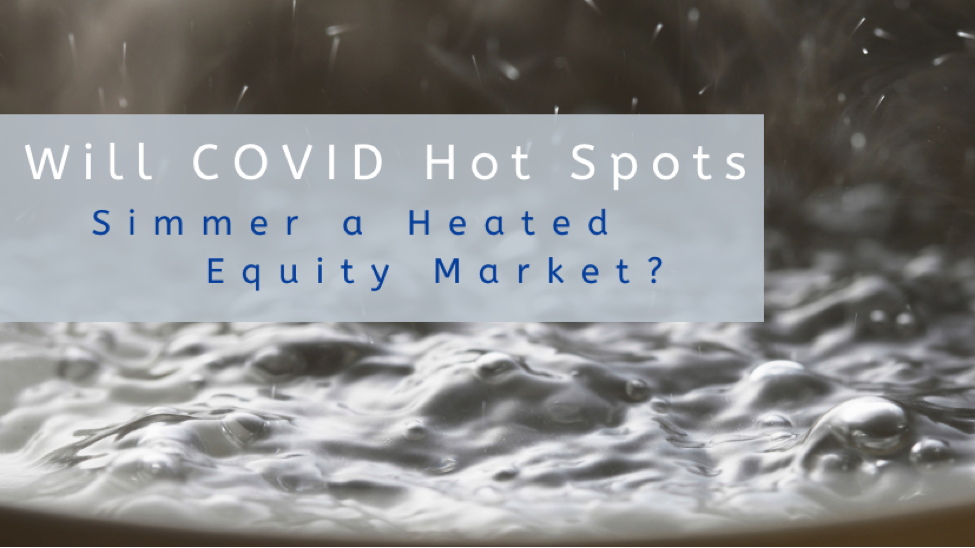 Fear of a second wave of COVID-19 is still top-of-mind for many Americans. In fact, “second wave” headlines dominated the media just ahead of the June 11 selloff.

The market quickly rebounded from the spook of rising coronavirus cases, but it does give us cause to revisit the fears of a second wave. At Gatewood Wealth Solutions, we continue to believe the market is less concerned about the virus and more concerned with any shutdowns to slow the virus.

Let’s be clear: we have not hit a second wave. Most states that are seeing increased death rates have been steadily climbing, so this is still part of their first wave. (The only exceptions could be Louisiana, Vermont, Wyoming, and Hawaii, which have seen new cases after a notable decrees). In addition, many of these states do not have high total cases, so it is still too early to determine if this is an issue.

The subtle implication of many reports is that states have been irresponsible in reopening. Specifically, media attention has been on Texas and Florida. These two states were among the first to reopen. Specific consideration is given to the recent Memorial Day celebration. It is a simple and attractive narrative, but the data suggest the increase is far more complicated. 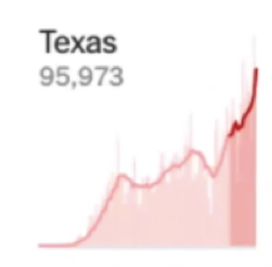 Let’s take Texas, for example. The 14-day trend line shows new infections in Texas have risen about 71% in the past two weeks. Confirmed infections have increased across the state. But hot spots like state prisons and meatpacking plants, which have recently been the sites of mass or targeted testing, are responsible for a portion of the increase, according to the Texas Department of State Health Services.

It is unlikely the prisoners were reveling in Memorial Day celebrations.

Florida is seeing increases around Miami. Georgia is increasing and also opened early but does not have the sharp increases of Florida and Texas. However, there are certainly spikes in the number of cases that coincide with relaxing the shutdown.

What about states that still have restrictions? 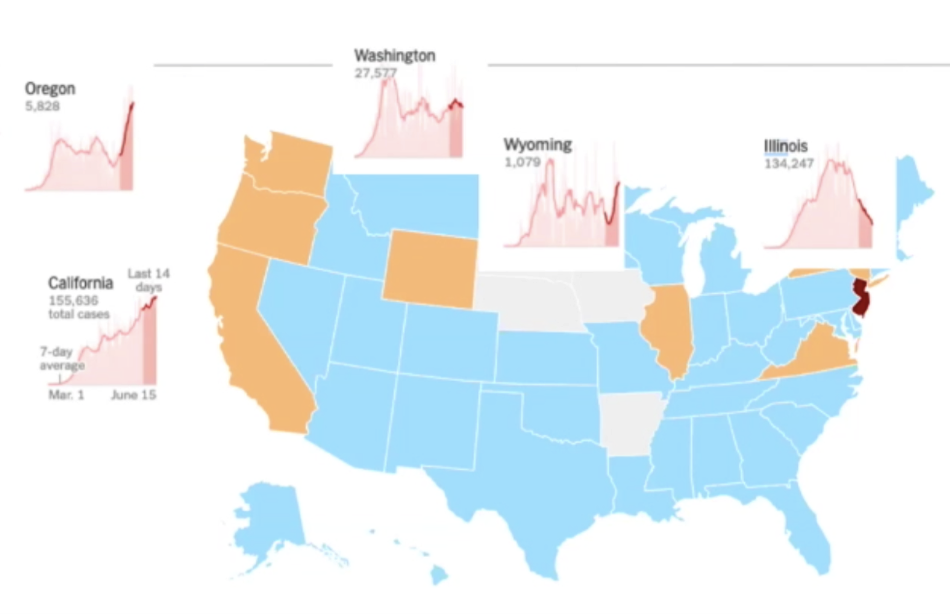 California, Oregon and Wyoming are also seeing an increase. California was one of the earliest states to report infection and has a large total case count. On the other hand, Washington and Illinois are showing decreases. We have also seen large protests in these states. There are also plenty of open states with decreasing numbers.

So, it appears the simple narrative in the headlines has some challenges.

In several of our other weekly updates, we’ve discussed the effectiveness of lockdowns in other countries. Sweden, for instance, did not mandate any shutdowns, and Japan did not restrict mobility. Yet, Italy and France (both of whom had higher restrictions) also had higher death rates, perhaps because they have older demographics. The U.S. ranks between France and Sweden on restrictions, yet has higher death rates.

Basically, there is inconclusive evidence regarding shutdown efficacy.

Do Lockdowns Save Many Lives? Some Data Says No

Given the murky lockdown data, it is helpful to revisit why we shut down in the first place. In Alex Bernsen’s recent book documenting COVID, he (snarkily) reminds us,

“The reason we locked down the United States and the rest of the world this spring was NOT to reduce coronavirus infections or deaths to zero. We have never pursued such a policy with any other respiratory virus, nor with viruses such as HIV, which until effective medicine existed killed nearly everyone who contracted it. No, the reason we initially agreed to lockdowns was to ‘flatten the curve,’ which is a polite way of saying ‘to prevent coronavirus patients from collapsing our health-care system.’”)[1]

Bernsen may be snarky, but his statement is true. This was the reason for the lockdown. 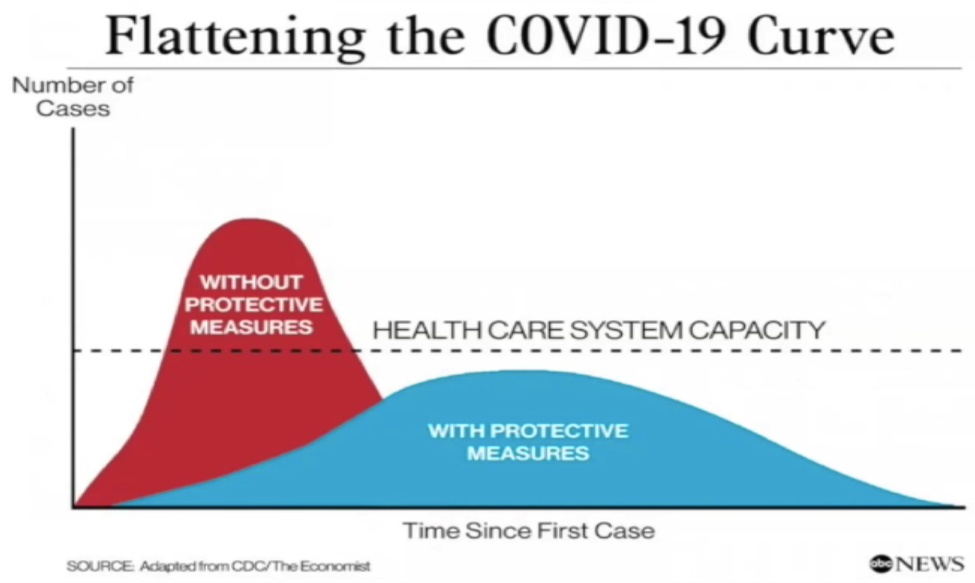 The initial fears were the fatality rate was as severe as the Spanish Flu. However, the CDC's latest data indicate a .004 or .4% fatality rate. In addition, the models assumed hospitals would be overrun. This never materialized.

In fact, based on model predictions, the Pentagon deployed the USNS Comfort and the USNS Mercy in March to help with the surging coronavirus cases. Once again, these, thankfully, never materialized, and the ships were eventually sent back home.

We will never know how much the shutdowns did or did not help. Instead of arguing over counterfactuals, let’s look at hard data on the Case Fatality Rate.

This is not to say the virus has no risk. There are certainly deaths. [101,291] documented by the CDC. And this is a lagged number. And there is certainly an increase in deaths above the very constant weekly average.

So, who specifically bears the risk?

COVID is still very much a threat. The risk of death is highest for the aged, specifically those with comorbidities. This can be seen in the case of Italy, whose median age of deaths was above 80. Or in Minnesota where the median is 83.6. Or in New York, where more than half of the deaths are over age 80.

This has been a fairly comprehensive recap of what we know about the potential for a second wave. Here are the main points to remember:

Let’s move on to what we are seeing in the economy.

An Eye on the Economy

Last week was quiet, with little change in GDP. Nonetheless, we believe the bottom of the economic data is in. This is the long climb up.

With the lack of economic activity but increases in unemployment benefits where many were making more than before, there was a substantial jump in the personal savings rate. We’re actually up to more than 30%. This will turn into “pent up demand.”

A 17.7% headline gain including food sales easily topped the record 6.7% from October 2001and beat the 8% estimate from economists surveyed by Dow Jones. Clothing and accessories stores reported the biggest percentage gain at 188%, while sporting goods, hobby, musical instruments and bookstores rose 88.2%.

Much of the above are used in homes. As an example, it is difficult to find home gym equipment because so many people are building home gyms.

Listeners may recall, we recently added a Home Builders ETF in exchange for Gold based on our technical analysis. After the stay-at-home orders, many are likely budgeting more for their homes. We also anticipate a move away from large cities and towards the suburbs.

Let’s move on to the way the market is behaving. We did have a sharp selloff last week with the initial fears of additional shutdowns, those quickly faded. What is instructive is how the market moved. We have not added any lines to this week’s price point chart. Yet the market traded inline with these price points. Many market traders are watching the technical and acting off of them. This makes sense, considering the monetary policy is to divorce the market from fundamentals. 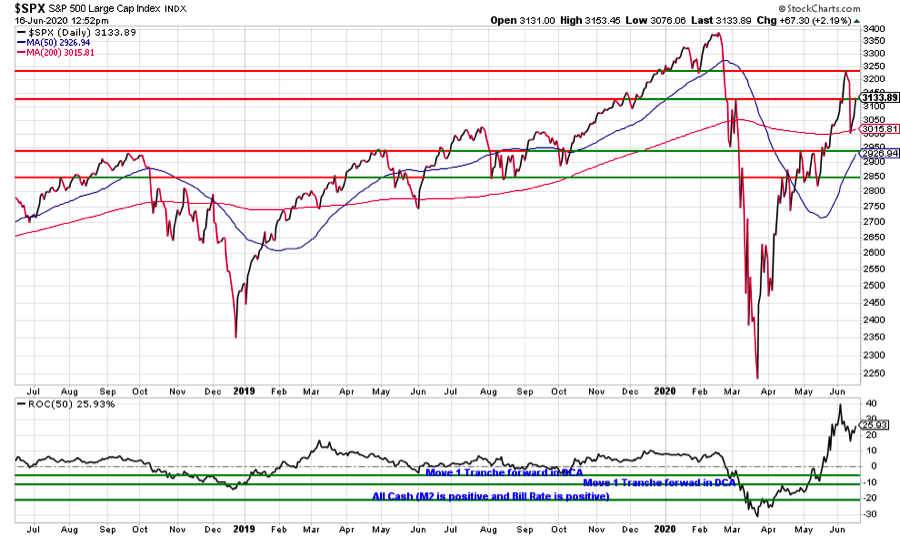 The lesson: DO NOT SHORT THIS MARKET.

The Fed has the backs of people who are willing to stay long in the market. It’s not a coincidence that Chairman Powell came out after a 200-point drop and said the Fed would continue to act and provide assistance to the market.

We finished many of the trades last week in qualified accounts to favor US Domestic, meaning we added small cap and mid cap exposure from large cap.

The S&P 500 is near the bottom ranking but we have moved more towards Mid & Small while maintaining an overweight to technology.

International is also ranked higher than the S&P 500. In Qualified accounts, we swapped our international fund for a Small Cap World fund. This has exposure to US Small Cap but also international small cap. This should provide better diversification as well as doing better than International large cap companies.

With an overweight to US Domestic, we are watching the strength of the dollar relative to other currencies. The dollar has dropped precipitously but is up for the week.

Tune in to our weekly Gatewood Wealth Solutions Market Webinar to hear updates on the current state of the market and economy. As always, please feel free to share with any family and friends you think could also benefit.

The opinions voiced in this material are for general information only and are not intended to provide specific advice or recommendations for any individual. All performance referenced is historical and is no guarantee of future results. All indices are unmanaged and may not be invested into directly.

The economic forecasts set forth in this material may not develop as predicted and there can be no guarantee that strategies promoted will be successful.

All investing involves risk including the possible loss of principal. No strategy assures success or protects against loss.

Dollar cost averaging involves continuous investment in securities regardless of fluctuation in price levels of such securities. An investor should consider their ability to continue purchasing through fluctuating price levels. Such a plan does not assure a profit and does not protect against loss in declining markets.